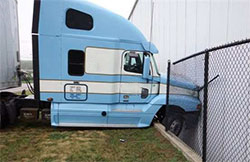 The United States District Court for the Western District of Michigan (the “Court”) recently dismissed a lawsuit seeking recovery of property damages filed by the property owner against a motor carrier and its truck driver.

The case hinged upon the Court’s analysis of whether the accident and resulting property damage arose from the tractor-trailer's use as a motor vehicle. The defendants argued that it should, while the plaintiff asserted that Michigan’s owner’s liability act - which has a longer statute of limitations - should apply instead. The Court ruled in favor of the defendants, and held that Michigan's no-fault act governed the dispute. Because the plaintiff’s lawsuit was filed more than one year after the incident, which was outside of the no-fault insurance act’s statute of limitations, the case was dismissed.

The accident at issue involved a tractor-trailer that was on a downhill grade across from the plaintiff’s warehouse. The unattended tractor-trailer rolled down the hill and into the warehouse, causing property damage but no personal injury.

Despite the absence of a driver, the Court ruled that the damage occurred because of “the use of a motor vehicle as a motor vehicle,” which is required in order for the no-fault statute to apply. The Court explained that the “vehicle did exactly as it was designed to do, it moved.”

Dirk Beckwith at Foster Swift represented the motor carrier and its driver.